UPDATED: Weekend Predictions: 'The Karate Kid' and The A-Team'

It's going to be a nostalgic weekend at multiplexes across the country. Moviegoers will be able to choose between two rebooted properties from the '80s. 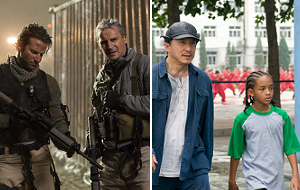 Wednesday Afternoon Update: The Karate Kid and The A-Team will surely end Shrek Forever After's three-weekend reign on top of the box office.

The Karate Kid has the distinct advantage of being more family friendly than The A-Team, and that's going to be crucial during what's shaping up to be a very close race for the #1 spot.

Reviews indicate that The Karate Kid is indeed a successful reboot, which has to be a relief for Sony considering that recent cinematic history is littered with failed attempts to revitalize successful properties.

The martial arts flick ranks third in the most recent BOXOFFICE WebWatch report measuring online opinions for upcoming films. With a solid 6.43 percent market share, only The Twilight Saga: Eclipse and Toy Story 3 are performing better.

While the fan count on its most active page is quite high, The Karate Kid has shown only modest gains on Facebook this week. Its performance on Twitter is more impressive.

As of 4 p.m. PT, The Karate Kid represents a promising nine percent of daily sales on Fandango, putting it behind only Eclipse with 37 percent.

Look for The Karate Kid to bring in $35.5 million from 3,400 locations during its debut frame.

The A-Team represents a big test for star Bradley Cooper and director Joe Carnahan. If it's a success, Cooper will be able to appear in more action flicks in addition to taking on comedic roles. As for Carnahan, The A-Team marks the first time he's been given a super-sized Hollywood budget. A hit here could make him one of the most sought after action helmers in Hollywood.

According to WebWatch, The A-Team ranks fifth among all upcoming releases in terms of online opinion volume with a 3.80 percent market share.

The A-Team hasn't developed a strong following on Facebook, and its performance on Twitter is also a bit underwhelming.

Surprisingly enough, it looks as though the action-heavy flick may reach a strong portion of female moviegoers.

"A-Team actually has very good want-to-see levels among older females, as well, thanks to the combination of Bradley Cooper and Liam Neeson," says Flixster spokesperson John Singh when discussing activity on the popular website.

As of 4 p.m. PT, The A-Team represents only three percent of daily sales on Fandango.

Check out our Top 10 predictions in the table below.